Discover the typical fruits of Brazil. Brazil is a tropical country, divided into 5 regions, rich in biodiversity. Producing different types of fruit throughout the year. Choose the region, click and learn more: 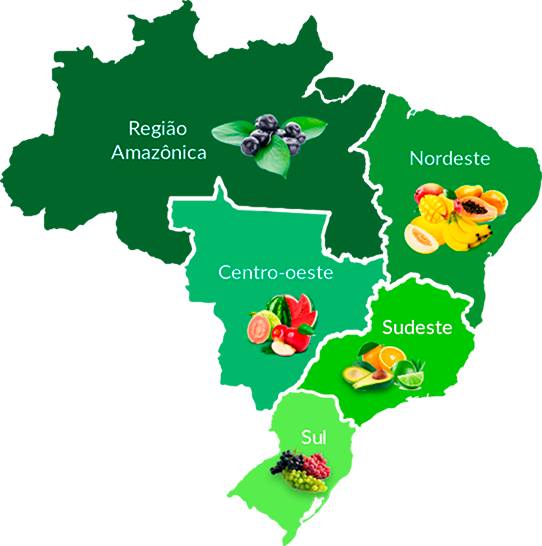 The North Region is one of the five regions in Brazil. It is formed by seven states, namely: Acre, Amapá, Amazonas, Pará, Rondônia, Roraima and Tocantins. The Amazon rainforest, which covers much of the northern region of Brazil and extends to Colombia, Peru and other countries in South America. The Amazon is the largest rainforest in the world, famous for its biodiversity.
Although the Amazon region extends to other countries, it is in Brazil where the production of açaí is concentrated. Açaí is a specifically Brazilian fruit.
Today, the leading state in production is Pará, with almost 90% of the market, but açaí is appreciated throughout Brazil and has gained prominence in even international cuisine.

The Northern Region of Brazil is crossed by thousands of rivers, including the grandiose Amazon River. And the Brazilian fruit production, especially the production of açaí, is important for the social and economic development of riverside cities.
The territory of Amazonas is covered in its entirety by the largest tropical forest in the world and has 98% of its preserved area. Combining its ecological potential with a business policy based on sustainability.
In the state of Amazonas, the city of Manaus is located on the banks of the Rio Negro and, for several kilometers, the dark water of this river flows along the clear water of the Rio Solimões, in the so-called Encontro das Águas, from this union the Rio Solimões changes its name and is renamed Rio Amazonas. An abundant and very fertile region.

It is the Brazilian region that has the largest number of states (nine in total): Alagoas, Bahia, Ceará, Maranhão, Paraíba, Piauí, Pernambuco, Rio Grande do Norte and Sergipe.
Due to its different characteristics of climate and vegetation, the Northeast region is divided into four sub-regions: mid-north, sertão, agreste and forest zone. The Northeast region was the cradle of European colonization in the country, as the discovery of Brazil took place there and the exploratory colonization was consolidated, which consisted, in short, in the extraction of pau-brasil, whose wood paint was used to dye clothes. of the Old World nobility.
The São Francisco River is one of the most important in the country, especially in the Northeast, which is used by the people to transport goods, in addition to providing water for various uses such as irrigation in fruit production.
Fruit growing has high economic and social importance in several areas. The Region accounts for 27% of the national fruit production, standing out in various crops such as banana, guava, papaya, mango, passion fruit, pineapple and melon.
The Northeast represents the region with the greatest potential for the production of tropical fruits.

The Midwest Region is one of the five regions in Brazil defined by the IBGE in 1969. It is formed by three states: Goiás, Mato Grosso and Mato Grosso do Sul, plus the Federal District, where Brasília, the country's capital and the most populous city in the region.
The climate of the Midwest region of Brazil is tropical, hot and rainy, always present in the states of Mato Grosso, Mato Grosso do Sul and Goiás. The most striking feature of this hot climate is the presence of a rainy summer between the months from October to April, and a dry winter, from May to September.
In the Midwest it is common to find watermelon, apple, guava, grape and atemoya productions. 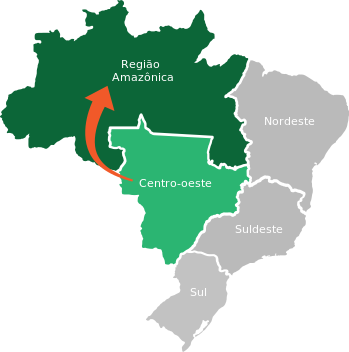 The Brazilian Southeast is a region that encompasses the 4 neighboring states of Rio de Janeiro, São Paulo, Minas Gerais and Espírito Santo. The tropical climate prevails in the coastal lowlands of Espírito Santo and Rio de Janeiro, north of Minas Gerais and west of São Paulo.
It has high temperatures (annual average of 22 °C – 71 °F) and two defined seasons: a rainy season, which corresponds to summer, and a dry season, which corresponds to winter. The subtropical climate, which appears in almost all municipalities in Greater São Paulo and in the south of the state of São Paulo, is characterized by well distributed rainfall throughout the year (average annual temperatures around 16 °C to 17 °C – 60 °F to 62 °F) and by a large temperature range.
Brazil is the third largest producer of fruit species in the world. In the state of São Paulo, climatic conditions are favorable to produce mainly fruits: Orange; Lemon; Grape; Banana; Atemoya; Avocado and Guava. 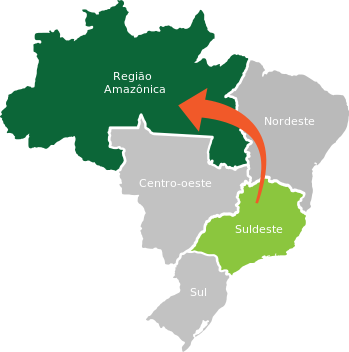 The Southern Region of Brazil is the smallest of the five regions in the country. It is divided into three federative units: Paraná, Santa Catarina and Rio Grande do Sul. It is the only Brazilian region located in the southern portion below the tropical zone, with the seasons varying clearly.
A large number of immigrants came from Uruguay, Argentina, the Azores, Spain, Germany, Italy, Poland, Ukraine, the Netherlands, among others. The population characteristic given by the Europeans who contributed to the formation process of Brazilian society in the 19th century was the predominantly Caucasian ethnicity.
The South Region currently produces 80% of the country's grapes. 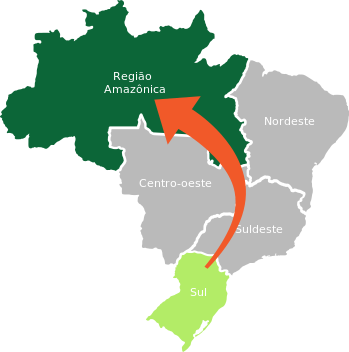