Guava is a tropical fruit, typically produced in Brazil and has a delicious and distinctive smell. It is a widely consumed fruit in the domestic and international market, mainly fresh, but it can also be used in desserts, juice, vitamins and sweet, such as the famous Goiabada Cascão (traditional guava sweet).

The most common varieties of guava are the white pulp, which has a higher productivity index and the red pulp which has the preference in the consumers market for being industrialized. 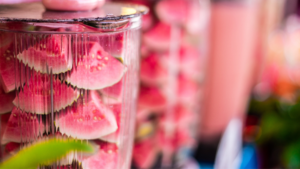 The differences between the two types go beyond the color. The white pulp guava is rich in vitamin C and the red pulp one is better when the topic is protein. But both are excellent for the intestinal transit.

Brazil is among the main producers of red pulp guava in the world. According to data from the Municipal Agricultural Production (PAM) 2020, from the Brazilian Institute of Geography and Statistics (IBGE), the country produces an average of 566 tons of guava, in 22,000 hectares.

In relation to the consumption of the fruit, the Family Budget Research (POF) 2018, also from IBGE, shows an average consumption of 0.362 kilos per Brazilian per year, which is considered small, as guava is one of the most popular tropical fruit and of greatest acceptance in the country.

And it is not only in Brazil that guava is successful, Europe is also a great consumer of the fruit. According to the Agroindustry Cooperative from Carlópolis (COAC), in Northern Paraná, the exportation of the fruit by the cooperative doubled in February and March this year. The main destination was London, in England besides Portugal.

In 2019, the guava produced in Carlópolis obtained the certificate Geographic Indication and the seal Global Agricultural Practices, GAP. Since the achievements, the producers of the region have received several orders from countries in Europe (Portugal, the Netherlands and Switzerland), Asia and North America.

Data from the Brazilian Association for Producers of Fruit and Derivatives (Abrafrutas) show us that in the first quarter of 2022 Brazil exported more than 118 tons of guava, an increase of 25% in relation to the same period in 2021, when it exported 94 tons.

And the revenue for the shipments exceeded US$ 263 thousand in the first three months of the year, compared to US$ 224 thousand from last year, an increase of 17%.

Besides producing and exporting the red pulp guava, Brazil has the potential to explore the white pulp. Currently, this variety is produced in the Asian countries, such as India, and very consumed in salads by the Europeans.

Meet the producers and exporters of Guava in Brazil – https://frutasdobrasil.org/pb/exportadores/